Notably, the few personalities like Swara Bhasker, Richa Chadha and Zeeshan Ayyub, and directors Anurag Khashyap, Anubhav Sinha who have condemned police brutality and spoken out firmly against the Citizenship Amendment Act (CAA) on public fora were not figured out in the list of invitees.

According to news outlets HuffPost and The Hindu, the meeting is reported to be organized by film presenter and producer Mahavir Jain, who is widely seen as Modi’s man in Bollywood.

Goyal’s invitation to dinner at Mumbai’s Grand Hyatt Hotel on Sunday, January 5 has been widely circulated on WhatsApp since January 3.

“The idea behind the meeting is quite inclusive in approach and we request the participation of all the rational thoughts and different points of view pertaining to the Citizenship Amendment Act,” reads the invite message Whatsapped to several Bollywood stars.

“We strongly believe in a healthy discussion around all the possible dimensions of the issue. Your inputs will enlighten the discussion. It will be followed by a scrumptious dinner. Please come over . See you. ?” 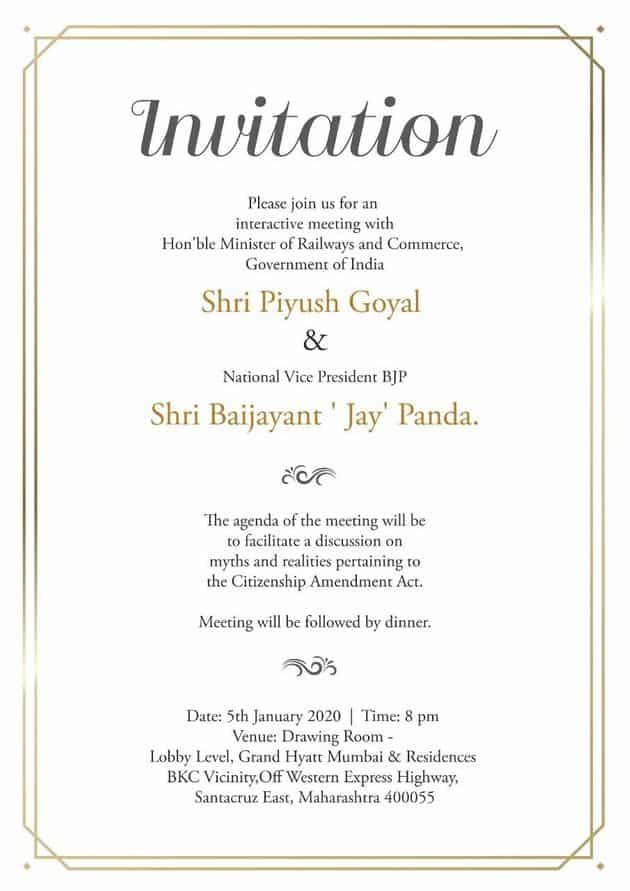 Several parts of India have been witnessing violent protests ever since the Citizenship (Amendment) Bill was passed in the Parliament.

Following the protests rocking India, an exhaustive list of all the celebrities crawled out of their privilege and unequivocally called the Act out for its discriminatory nature.

However, Bollywood’s top brass: the Khans, the Kapoors, the Bachchans, the Roshans, and Karan Johar maintaining a deafening silence.

Excluding Muslims, the Act grants Indian citizenship to refugees from Hindu, Christian, Sikh, Buddhist and Parsi communities fleeing religious persecution from Pakistan, Afghanistan, and Bangladesh who entered India on or before December 31, 2014.

INDIA ON ALERT! CHINA’S CORONAVIRUS DEATH TOLL MOUNTS TO 41, AROUND 1,300…