Kolkata Knight Riders’s (KKR) latest recruit Tom Banton, playing for Brisbane Heat in the Big Bash League (BBL), set the Sydney Showground Stadium alight with his 16-ball half-century in a rain-curtailed game on Monday. Opening the batting for his side after they won the toss and elected to bat against Sydney Thunder in the truncated 8-over-per-side match, Banton tormented the opposition bowlers with his hitting prowess and brought his fifty in style by smashing five consecutive sixes off the bowling of Australia’s Arjun Nair in the fourth over of the innings. His 19-ball 56 was studded with two fours and seven huge hits over the fence.

Brisbane Heat skipper Chris Lynn (31 off 13 balls) and Banton got their side off to a thunderous start as they added 50 runs inside three overs. They stitched a 90-run partnership for the opening wicket in the first five overs.

Both Banton and Lynn, however, got out in quick succession but their explosive start provided their side with a solid foundation and they ended up scoring 119/4 in eight overs. Sharing the video of Banton’s power-hitting, the official handle of the BBL tweeted: “This is just extraordinary. Tom Banton launches five consecutive sixes! #BBL09”. Last month, two-time champions Kolkata Knight Riders had bought the England all-rounder for his base price of Rs 1 crore in the IPL 2020 auction held in Kolkata.

Ever since earning an IPL contract with KKR, Tom Banton has been in tremendous form in the ongoing edition of the BBL.

A day after he was bought by the KKR, he scored a fifty off just 29 balls against Melbourne Stars in Queensland. In that match, he got out after scoring a quickfire 64 runs off just 36 balls. 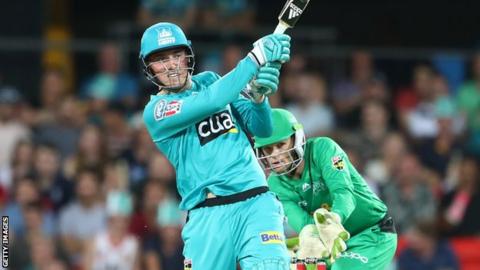 When Sydney Thunder came out to bat, the rain stopped the play in the third over of their innings and the match was reduced to five overs.

After the rain break, they were given a revised target of 77 runs and they needed 55 runs to win from 17 balls. In the end, it all proved too much for the hosts and they lost the match by 16 runs via the DLS method.

Harmanpreet Kaur:We have young side with match-winners.

Australian Open 2020: Serena says she was ‘nowhere near’ Coco Gauff’s level at 15