Selena Gomez and Hailey Baldwin Were Seen at the Same Restaurant and, Uh, Everyone’s Mad at Madison Beer?

I know everyone’s very busy obsessing over the royal drama right now, but please divert your attention to Selena Gomez because she accidentally went to dinner at the same restaurant as Hailey Baldwin on Saturday. Which could have been super awkward, but definitely wasn’t thanks to everyone being incredibly mature, tyvm!

Selena hit up popular West Hollywood restaurant Craig’s with some of her friends, and Hailey happened to be there with Madison Beer (don’t panic, Justin Bieber wasn’t in attendance).

Selena and Hailey don’t appear to have run into each other, but now Madison (who’s also friends with Selena) is getting a ton of backlash on Instagram from fans who think she’s betrayed Sel by hanging out with Hailey.

Madison defended herself amid a sea of snake emojis, saying “These rumors are getting insane…I just had dinner with my friend Hailey of 10 years… and that’s it? How is that a crime? I love Selena… always have (as y’all know). And I would literally never in a million years try to upset her??? This is just mean and unnecessary and nothin happened. It was just a coincidence, you’re bullying me for no reason…” 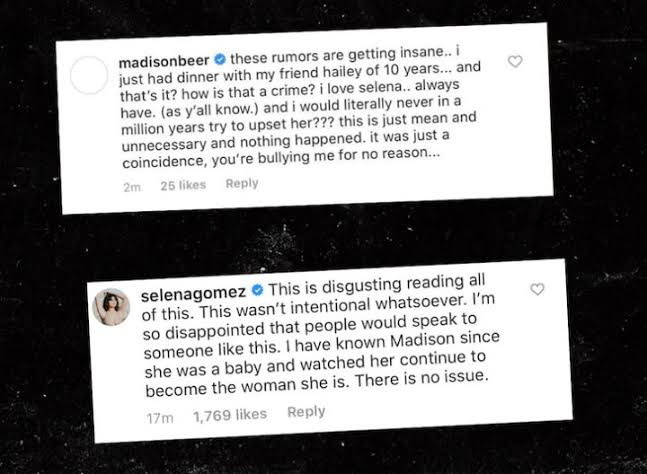 Meanwhile, Selena also jumped into the comments saying “This is disgusting reading all of this. This wasn’t intentional whatsoever. I’m so disappointed that people would speak to someone like this. I have known Madison since she was a baby and watched her continue to become the woman she is. There is no issue.”