Over 3,000 Tonnes Gold Deposits Found In Sonbhadra district of Uttar Pradesh||Sara Ali Khan To Play A Double Role As She Romances Akshay Kumar & Dhanush In 'Attrangi Re'||Hebah Patel Got Limited To Such Vamp Role.||TS govt considers auctioning assigned land:Short on funds.||Netflix testing out access at Rs 5 only for the first month in India.||Woman Who Raised Pro-Pakistan Slogan at Bengaluru Rally as AIMIM Asaduddin Owaisi getting angry and Tried to Stop Her Charged With Sedition||Pune police files complaint against social media posts linking coronavirus with poultry.||CAA will adversely impact Muslims in India, says USCIRF .||French ski resort criticised over use of helicopters to transport tonnes of snow.||You Must See Justin Bieber Learning Choreography From Adorable Toddlers.
Breaking News

Similarly, for every statistic on the criminal justice system,there’s an unsettling story to be told. Destin Daniel Cretton’s film tells one which reminds us of the human toll when an imperfect justice system makes a potentially fatal error in judgement.

In 1987, Bryan Stevenson (Michael B Jordan), an idealistic young Harvard graduate, moves to Alabama to defend Walter McMillian (Jamie Foxx), a black man wrongfully imprisoned and sentenced to death row for the murder of a white teenage girl. With the help of a capable right hand in Eva Ansley (Brie Larson), he works to exonerate McMillian, but to do that, he must prepare himself for the legal and political minefield that is — the anything but sweet home — Alabama.

Like To Kill a Mockingbird, Just Mercy offers a typically grim portrait of the American justice system. Its notable parallels to the Harper Lee novel — from the Alabama setting to the racist white community to the wrongful conviction of a black man — only show how little has changed since the 1930s to 1980s to even now.

Botched investigations and manipulated evidence are not exactly a thing of the past, and black men continue to endure abuse at the hands of law enforcement (through harassment, coercion or police brutality). But Cretton’s direction lacks the same level of compassion Barry Jenkins brought to If Beale Street Could Talk,or the same level of outrage Ava DuVernay brought to When TheySee Us. So, it fails to rise above a conventional courtroom drama.It simply fits the pieces together to reveal an obvious truth about the miscarriage of justice. 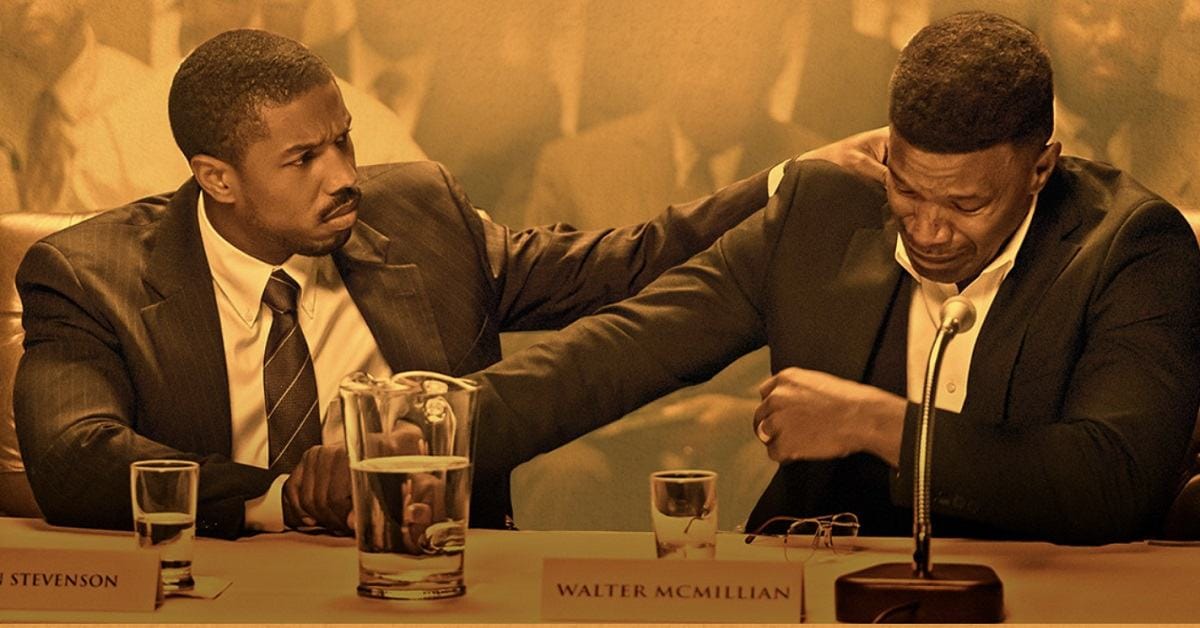 Stevenson, who wrote the memoir upon which this film is based,even went on to establish the Equal Justice Initiative to provide legal representation to wrongfully convicted criminals like McMillian. But the film fails to give us a true representation of who Stevenson is, what drives him besides his job and what his internal conflicts are — at least not in a way that resonates with viewers. So, Jordan is left to flesh out the character based on limited context. Even Larson has little to work with, loitering around in the periphery.

Foxx enthrals as a death row convict who cannot help but accept his fate before a young man helps him find hope within hopelessness, and heart within heartbreak. McMillian is convicted by an all-white jury based on the coerced testimony of a white criminal despite his black neighbours and family providing him an airtight alibi. Having grown up in a world of such racial injustices, he is expectedly cynical when Stevenson attempts to have his case reviewed but the young lawyer helps him regain some faith in the justice system.

Rob Morgan’s supporting role as McMillian’s fellow death row inmate, Herbert Richardson, provides the film another painfully emotional undertone. Richardson was a Vietnam War veteran suffering from Post-Traumatic Stress Disorder, who never got the emotional support he needed on his return home from war. Unlike McMillian, he is guilty of his crime. But it still doesn’t make his execution any less horrifying, as images of Richardson on the electric chair are intercut with Stevenson’s face, as the former takes his last breath before being electrocuted to death. This not only sets up the stakes for what could be in store for McMillian but also makes you question a flawed justice system which can make mistakes it cannot rectify — a system that denounces murder and sanctions murder at the same time. It also brings to light how easily the country abandons those who fought so courageously to protect it, and promote its “democratic” agenda.

Just Mercy serves as a reminder that life is never as simple as black and white, or innocent and guilty. Only you wish Cretton gave equal emphasis to style and structure as subtext, like he did with his phenomenal second feature, Short Term 12. Just Mercy could have then been more than just a standard legal drama, but a punch in the gut to America’s civil rights legacy.

You Must See Justin Bieber Learning Choreography From Adorable Toddlers.

‘Zombies 2’ Cast: The Werewolves Bring ALot Of ‘Trouble’ & Their Music Style Is…