“I think the fact that you have to wear all completely loose clothing that you really can’t tell what type of body type that you have,” the Famous in Love alum, 22, told Us Weekly exclusively on Thursday, March 19. “The fact that every single inch of skin, like, I mean every single inch [is covered]. You have to wear that s–t to work every day. You have to perform and rehearse in the mask and stuff. You’re going over dance steps, so that became sweaty, really quickly.”

Thorne admitted that she was “surprised” by how seriously those involved in the show take things. However, there was one “really crazy” thing she encountered that threw her for a loop.

“Anybody that’s a guest of the show — not us [stars], but my assistants and my vocal teacher — have to go sit in a room together where somebody monitors them as they watch the show live,” she explained. “They cannot speak. They all have to wear visors, which they can barely see out of. Everybody’s people just sit in a room and watch, but cannot speak to each other.” 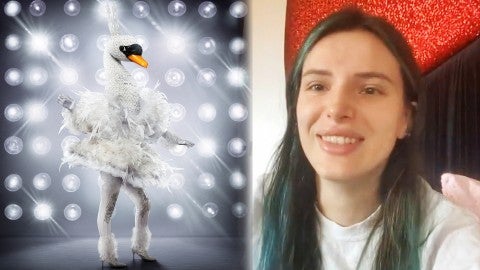 The former Disney Channel actress continued, “There’s somebody in the room making sure that no one takes off their mask and that no one speaks. [They’re] not able to talk to one another. It’s so boring to [not] talk amongst each other, nothing. It’s, like, you can’t even comment like, ‘Yay, go someone.’”

Thorne, who starred alongside Masked Singer judge Ken Jeong in 2015’s The Duff, was unmasked as the swan during Wednesday’s elimination. Ahead of her big reveal, there were clues that the former child star may have been the costumed character.

In the swan’s clue package, the masked figure displayed vampire fangs, a nod to Thorne’s Filthy Fangs brand. The swan’s ballet dance seemingly hinted at Thorne’s dance background from her former Disney Channel series, Shake It Up, and images of a ghost are shown, which appears to align with her 2016 role in Boo! A Madea Halloween.

“If I would have still kept on the show, my next songs would have been ‘Changes’ [by XXXTentacion] and ‘The Climb’ by Miley Cyrus,” she admitted to Us on Thursday. “‘The Climb’ would have been so good. My voice sounds as good as f–k in that song. [It’s] so sad I got kicked off early.”

Despite her elimination from The Masked Singer, Thorne’s journey with Fox isn’t over just yet. On Wednesday, March 18, it was confirmed that the multi-hyphenate inked a development deal with Fox for both scripted and unscripted content.

“One of the main things that I’ve been saying recently is thank you to Fox for really sticking your neck out and saying, ‘I’m going to hire a young ass writer-producer at 22 years old because this is the person that if anybody’s going to speak to the generation right now and be more realistic with them, it’s going to be her,’” she explained to Us. “That’s just so much trust and whatnot. To put in me and I’m just so thankful. I don’t see a lot of networks taking that chance with the younger talent, which they really should be.”With reporting by Travis Cronin

Why Lily Allen and David Harbour Are Sparking Marriage Rumors